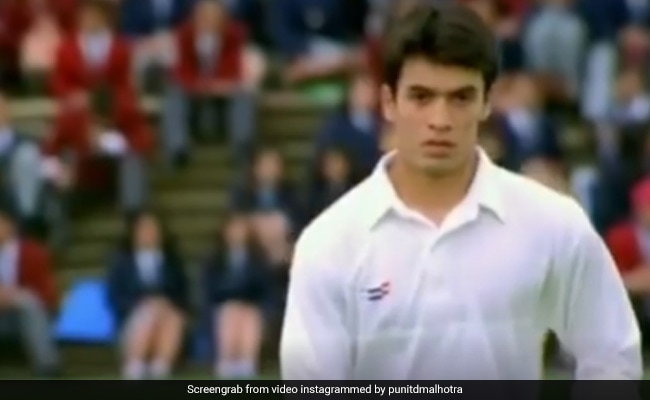 Punit Malhotra in a scene from the video. (courtesy: Puneetdamalhotra,

It’s been (okay, almost) 20 years since we were introduced to the Raichand family, the lanes of Chandni Chowk, and Poo’s oh-so-stylish wardrobe through the lens of Karan Johar. Of course we’re talking sometimes happy some times sad, the great masterpiece of Karan Johar that gave us memories and memories for a lifetime. Released on 14 December 2001, the film will complete 20 years in two days and the director Karan Johar had promised a week long celebration to mark the same, And, two decades later, director Punit Malhotra, looking dashing and young as ever, joined the celebration by recreating his cameo from the film.

Wait, Punit Malhotra was in the film? Yes, remember Hrithik Roshan’s introduction shot? Well, Punit Malhotra played the role of the unfortunate bowler who got hit by a six off Hrithik’s character and looks like even after 20 years, Puneet is not happy with it. Sharing his bits of entertainment as well in the scene, Punit Malhotra wrote, “My first film, my first film as an AD. And just Karan Johar to thank for such good memories. The only thing that still bothers me is that I hit a six.”

Colleagues and fans of the director couldn’t stop talking about how amazing he looks in both clips and how he doesn’t age in the slightest. Reacting to the clip, Karan Johar wrote, “Wow! Hero.” Karisma Kapoor wrote, “Kill it,” while Tiger Shroff said, “Hero.” Sonakshi Sinha wrote, “Your acting skills have improved.”

Before Punit Malhotra’s video, we revisited an iconic scene featuring Ananya Panday and Dhairya Karva featuring Kareena Kapoor and Hrithik Roshan. Sharing this clip, Ananya Pandey wrote, ‘No one can do like Kareena Kapoor Khan and Hrithik Roshan. It’s just two fans trying too hard. I can practically recite this entire film, so thank you Karan Johar, you assure us all a happy ending.”

Similarly, Director-choreographer Farah Khan Kunder, Who also acted in the film two decades ago, posted a video of his dance Bole bangles In the clip with Karan Johar, Karan Johar – in a bling jacket and sunglasses – pushes Farah Khan to dance to the song.